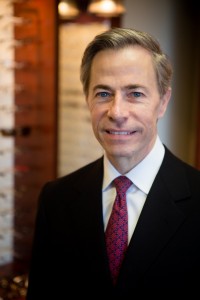 Dr. Alan L. Benedict was born in Illinois and raised in southwest Florida. He attended Loyola University in New Orleans with an academic scholarship and graduated Cum Laude in 1981. He then attended University Of South Florida College Of Medicine and received his medical degree in 1985. Dr. Benedict served his internship in Internal Medicine at North Carolina Baptist Hospital and then began his ophthalmology residency at Wake Forest University Eye Center in 1986. Dr. Benedict was given the prestigious position of chief resident of the Ophthalmology program in 1988. Dr. Benedict entered general Ophthalmology practice in 1989 and attained his Board Certification in Ophthalmology in 1991. Dr. Benedict completed post graduate training for LASIK Surgery at The Emory Vision Correction Center. Dr. Benedict has practiced in this area since 1992. Over the past years, he has helped countless patients see better with his treatment of ocular diseases. He has taught his cataract surgery technique to other ophthalmologists in the area.

Dr. Benedict’s special areas of interest include cataract surgery and refractive surgery to provide freedom from glasses or contacts. He has been performing LASIK since 1995. He is the first Cobb County based doctor to place the implantable collamer (ICL) lens for treatment of a wider range of refractive errors than LASIK.