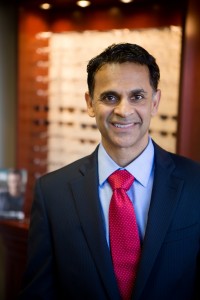 Dr. Hersh Chopra is a North Carolina native. He attended Duke University on the W.N. Reynold’s Scholarship and graduated Magna Cum Laude having completed the difficult pre-medical curriculum in three years. He received his medical degree from the University of North Carolina. Dr. Chopra completed his internal medicine internship at Washington University in St. Louis, MO. He then volunteered at the LBJ Naval Hospital as a physician in American Somoa before returning to Washington University for his residency in ophthalmology. He then completed his fellowship in glaucoma at Northwestern University in Chicago. Dr. Chopra is Board-Certified and was the first full-time glaucoma specialist in the local area. He has provided medical services at numerous Veteran’s Administration Hospitals in St. Louis, Phoenix, Samoa, and Maryville Indiana. He has been practicing in Marietta since 1993.

Dr. Chopra performed the first glaucoma implant surgery and the first 5-fluorouracil and mitomycin-C glaucoma filter (advanced methods of treating glaucoma) in the county. He was the first to successfully use tissue glues for the healing of ocular wounds in Cobb County.

Dr. Chopra helped in the introduction of releasable sutures in glaucoma filtering surgery, a technique that he described in the inaugural issue of the medical journal: “Glaucoma”. Dr. Chopra was also the first surgeon in the county to remove cataracts with only topical anesthesia (without the use of sharp needles), a technique that minimizes potential complication. He was the first surgeon in the county to use amniotic membrane transplantation to ease pain and facilitate healing after eye surgery. Dr. Chopra was one of the first surgeons in the area to place multifocal implants during cataract surgery. He has been removing cataracts and performing other eye surgery since 1988.

Dr. Chopra has served as the Chairman of the Ophthalmology Department at Wellstar-Kennestone Hospital and has authored several articles published in medical journals. He has also been active as a medical volunteer. Dr. Chopra’s special interest include glaucoma and cataract surgery.